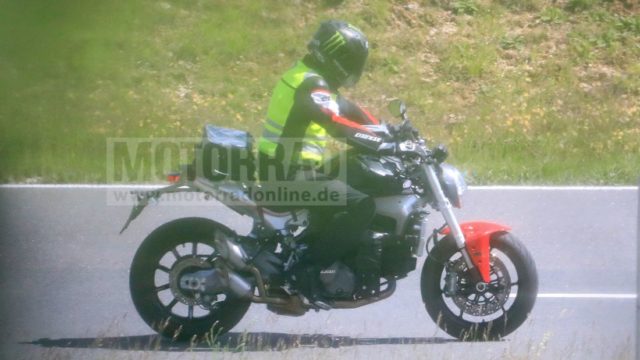 The next generation Ducati Monster has been seen on the streets according to a couple of spy pictures from Motorrad Online. It could have a new engine and a new frame design among its novelties.

It looks like Ducati is preparing to update and upgrade its motorcycle model range. After we’ve seen some spy photos of the upcoming Multistrada V4, now it looks like another bike it’s in the works. This time around it’s the naked Ducati Monster.

There’s nothing new regarding the fact that the naked bike lost a lot of ground in the past years if we take a look at some of its rivals such as BMW F900R, KTM 790 Duke or 890 Duke R, Triumph Street Triple R and Yamaha MT-09. So, to keep up with the middleweight naked motorcycle segment, Ducati has to refresh its Monster model.

The new Ducati Monster, as we can tell by looking at the spy photos, could have a new engine. In other words, it could feature the 950cc borrowed most likely from the Multistrada 950 which should mean a power and displacement increase from the current 821cc engine making 109 hp and 63 lb-ft (85 Nm) of torque.

Moreover, it looks like the frame configuration has changed as well. So, the new Ducati Monster could use instead of the steel trellis frame, a new aluminium made frame connecting the chassis and engine. Also, the front structure, which houses the steering head, looks screwed together in two parts. Other new features we can see at the rear frame which appears to be a cast construction. The new Ducati Monster could have other tricks up its sleeve, probably a new electronics package. We’ll have to wait and see when the middleweight naked bike is ready for production, but judging from the spy photos we could see the new Ducati Monster by the end of the year.

We rely on your donations to cover the most important news on the motorcycle market and create videos that excite, inform, and educate.

Make a one-time contribution or become a monthly subscriber. Every donation, however big or small, is valuable and helps us cover some of the video production costs, like equipment, transportation, and maintenance.

Thank you for being part of this journey.